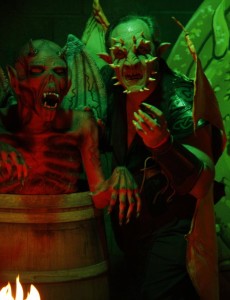 Originally a warlord and master of menace from the Realms Forgotten, Brimstone was transported to this realm through the careless actions of others. After a time, he was found wandering aimlessly in the desert by Kretin and Thanatos. They provided him with companionship, shelter and new alliances in this strange dry land. After a time, the two then brought him to Shadowhaven for sanctuary and respite. There they introduced him to others of the Dark Ones, to which he has currently pledged his allegiance and loyalty to.

He still wanders, though less aimlessly. He now focuses on mayhem and causing trouble where it can be found. He is also the father of The Morrigan.

—————————————————————————–
Known Aliases: Puck, Many others but none for repeating in mixed company.
Current Residence: Deamhan ar Coinnigh (Demon’s Keep).
Place of Origin: The Realms Forgotten
Profession: Blackguard  Warlord – Tyrant.
Race: Half Fiend.
Height: 5′11″
Weight: 230 lbs
Hair Color: Brown.
Eye Color: Hazel/Gold.
Distinguishing Features: Demon Wings, Horns.
Titles: Lord of Deamhan ar Coinnigh, Father of The Morrigan, Diabhal an Killkenny Contae.
Favored Weapon: Irish Hand and a Half Sword.
Likes: Cider, Gold, Mayhem, Mischief, oh and did I say Cider?
Dislikes: Angels and their ilk, bigots and close minded people.
Allies: Kretin, Thanatos, Blaze, Dark Ones Adventuring Group.
Enemies: None at the immediate, but give it time…. To many from the past to list here.
Special Lineage or Associations: Irish Half Fiend.