Her memories begin at age 7, in a small town known as the ocean’s grove. She found the buildings endlessly stuffy, and spent all her spare time outdoors singing with the birds and wandering with the bees. She was odd, and didn’t quite fit in man’s world. Some people thought she was fae, others thought her oddly simple for her esoteric brilliance. It was clear to everyone that she was “other” in some way, and she quickly figured out that most of mankind found any excuse to attack “others”. Over the years, she learned that some of mankind were not like the rest: that there were more “others”, and… she actually liked some of them.  Eventually she moved away from the ocean’s grove, and far, far away from the forests. Yet every moment Alseid was away from her grove, she got sicker. The world of man was an odd sort of poison, a cumulative effect that could only be healed by an equivalent amount of time safely tucked in her home. The urge to be near “the green” got stronger and stronger as time passed, yet not all green would do. She had a fierce need to be one with the land, to dig deep into the soil with her bare hands, and to set down roots. It took her a long time to realize it was the trees she was craving… but there were none in the desert she had ended up in. Not too long later she sought out land, planted fruit trees, and discovered what it was to have her own grove. She collected fruit trees of all kinds that would grow in the region, including Apricot, Peach, Fig, Citrus (Lemon, Lime, Orange, Grapefruit), and Olives. She also collected spice bearing plants, including Bay, Juniper, Pepper, Nutmeg, and Cinnamon. She planted them all around a huge Baobab tree. Her grove grew and grew until it was considered one of the most extensive orchards in the region, and her little produce store was always busy with the happiest of customers. 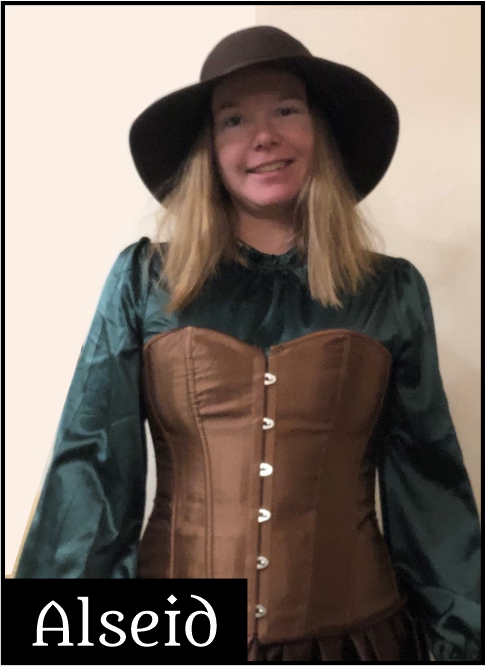 Lana Allaire (aka Alseid) cemented her association with the Dark Ones as a site co-host for Dead Man’s 2012, and attended events from 2011- 2015 before moving out of state. After her return, she ran a Kids’ Keep during August Party 2016, and assisted with August Party 2018 Cleanup. Then in 2019 she joined the Infrastructure guild and began working in earnest with Setup, Cleanup and Logistics. She also joined the Tavern Keepers guild (working the party kitchen) and recently the Guardians guild, with the intention of assisting by running a class.