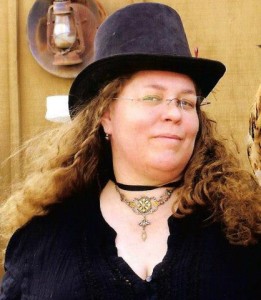 Biographical Information:
Born in the sea port city of Kotka in the frigid north, she was named for an exotic and beautiful green stone her father had seen on his travels. Jade’s father was the captain of a trading vessel and her mother was a baker. With her father away much of the time, as a young child, Jade knew little about the sea faring life or anything beyond the borders of her bustling home city. At the age of nine, while accompanying her mother home after delivering bread to one of the wealthy merchants in town, she witnessed the violent murder of her mother by thieves. She was cared for by family until her father returned from his latest voyage. That’s when Jade first set foot upon a sailing vessel. For the rest of her childhood she sailed with her father and saw the world. She earned her keep by assisting the ship’s cook, and would sometimes assisted the crew with their ship’s duties in order to earn some extra coin. At night her father would teach her to read and write; how to navigate by the stars and predict the weather. She learned to barter and trade and speak languages from many cultures. She was warned of the dangers that lurked in the sea, mermaids and great beasts. She swam with dolphins and fought off pirates, she explored cities much more ancient than her own home city. Her thirst for adventure grew as she did, and when she came of age, she made the choice to remain as a part of the crew of the Vete-Ema.

Today she is captain of her father’s vessel, continuing the cargo trade, fighting pirates and sea monsters, and navigating the waters of the world. If she’s in port, you can usually find her in a market or tavern spinning yarns or cooking up a tasty treat.

Summary:  Jade got involved with the Dark Ones back in the 90’s, and helped Chameleon with the old Dark Ones newsletter. In more recent years, she’s been working with DarkCon, helping at many promotional events, and in ’07 was Committee (Program Book), and in ’12 will be in charge of DarkSuite. Jade (formerly living in Tucson) has helped with several Dark Ones parties since moving to the valley, frequently providing food and sometimes helping with Set Up and Clean Up.