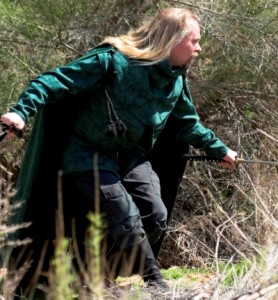 Oshiah of the Undying Nomads

Biographical Information:
After leaving his caravan, Oshiah traveled many worlds.  As he traveled he learned the tales and songs of new people and new lands with the hopes of one day bringing these tales back to his people.
Along his way, Oshiah has allied with nobility such as Duke Mordaryn and the war cleric Wilgar.
In travel, Oshiah is a great tracker and pathfinder, has an innate understanding of the ways of the beast, and the life of the land.
In combat, Oshiah is most known for his mastery of the bow, but getting in close can be just as brutal.  Not known for taking prisoners or leaving a foe wounded, Oshiah has studied the weapons of his friends and foes along his path and makes efficient use of them.
In camp or in town, Oshiah prefers the edge of the gathering over the center.  He watches others; studying their cultures and rituals to add to the tales he brings back to his people upon his return.
He often travels with others set upon a similar path as his, but always at his side is a great wardog named Dante.
Those that Oshiah calls family wear his mark upon them.  A simple purple sash known to his people as a Wahn (or “one”).