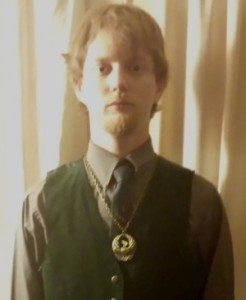 Biographical Information:
Phoenyx is an upper class Ambassador [from Capricerus] with the elements of Aether and Fire. He received his name for a chaotic style of fighting like the fury of Fire. When the government asked him to be an ambassador to the world of Renusair, he prevented a riot from overthrowing the authorities by speaking to both sides and having them compromise, which showed his Aether element of tying two opposing views onto common ground and work together for a common goal.

Phoenyx was sent to the world of Davos, home of the Dark Ones, the largest and more organized than the surrounding powers. They are lead by an oligarchy with a speaker. The current speaker is Shadowstalker. The Dark Ones have been around for many years and had gained its power through political and cultural influences. With large gatherings causing many conversations and many good relations to other cultures, the foundation of their world power is strong.

Phoenyx is from a distant world of Tanerus, a lush green world with 3 oceans and 4 major continents.
With forests that reach hundreds of feet into the sky, and mountains that have calm, fluid white rivers that goes for miles.
On the Kevani Mountain Range of the Northern continent lays the capital city of Capricerus. Home to the Capricans, a culture with high value in knowledge and life, and a deep sense of spiritual and scientific powers. Every person has 2 elements that spiritually power them. In the center of the city is a complex of 8 different and specially designed towers. Each of the outer 7 towers is designed and built for each of the 7 fundamental elements of Tanerus; Aether, Air, Darkness, Fire, Life, Light, and Water. They are known as the Elemental Towers and surround the Star Tower. The Star Tower is the tallest and largest tower of the 8 and has in its base a Stargate. A device powered by the Elemental Towers to send and receive people from other worlds no matter the distance. When the government has a visitor from the world Pangar, the Capricans felt it was time to meet the galaxy. It asked for ambassadors to be sent to every world and establish ties with that world’s people. The goal was to have friends and trading partners and peace with other worlds. The main method is to be part of that world’s dominant government or group.