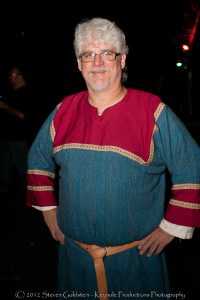 Biographical Information:
I travelled with many a Dark One before I even knew the group existed. In the wars I travelled with many that were (or would one day be) Dark Ones, such as Morgan, Shadowstalker, and Pagan. [Over the years I have worked ‘for’ as well as ‘with’ these three leaders of men… these days we oft collaborate on projects far and wide.]

My sister, Falconer, a skilled cook in her own right, and I found ourselves by happenstance travelling together with them in these very wars. We were prepping for a feast one night when a raiding party stole her from my kitchen. She was to be the bride of a Moor known as BlackHawke. I put up a valiant fight with my “spoon of doom” but to no avail, they took her from me. (But that is another story.) Since she then married the Moor, we have reconciled and hence become life-long friends.

For a number of years I was oft Head Cook for the travelling war camp, and helping in the kitchens you would often also find stalwart and hale companion Psycho as well as Nikolai and Phantom when they were not out on the battlefield or otherwise engaged.

Phantom was the truly inspired master of brewing what I called black gold… what I later learned was referred to as coffee. The only trouble was that he wasn’t always there. He would disappear without notice but never without having brewed some of this almost magical elixir. (I would late come to find out he was also a member of “The Guild” that does not exist and should never be spoken of.) He is often travelling abroad on Imperial business, and is always missed when away.

After the wars there was an interesting time that made me hearken back to my training as a youth on the Tilvanot Peninsula. Skills I hone in my spare time, skills that are of special use to Shadowstalker and the realm. During these times I occasionally find myself working with Phantom or even The Ripper in very special cases. Night Flier has also been a role model and mentor in his own way and is very helpful when you need a hop, skip & a jump to another plane of existence.

Currently I spend much of my time working in Shadowhaven as an innkeeper and I dabble in the Innkeepers Guild with the likes of Margie, Triad, and Nikolai whom often seem to be there when things start to get interesting and ‘eventful’. Margie in her position in the Shadowhaven guild structure was influential in not only introducing me to, but in helping me to reach the rank of Master. Then there is Ozzy, the ever-alluring and often vexing Baroness of Garret-Tor, who acts as would-be advisor and occasional confidante in times of strife. I aspire to many of the qualities I see in Triad when we break bread at some of the finer establishments in the Imperial City where he seems to know all the master chefs.

—————————————————————————–
Known Aliases: Requiem.
Current Residence: The Satisfied Sow Inn, Shadowhaven; that resembles the Combe Castle and village, Wiltshire England.
Place of Origin: Earliest known memories are of learning skills with the Brotherhood of the Tilvanot Peninsula.
Profession: Innkeeper, at least as far as anyone knows.
Race: Human, but I identify as a Hobbit.
Height: 5′9″
Weight: 230 pounds
Hair Color: Silver.
Eye Color: Hazel.
Distinguishing Features: Nondescript, he is the “everyman”.  You will never notice him until he is at your side with a mug of ale or a warm bowl of pottage.
Titles: A Master Innkeeper, no others that can be safely mentioned.
Favored Weapon: A consummate artist with poisons, a knife (12″ Sakin) – whatever the job requires.
Likes: Drink, Bacon and Big Women.
Allies: Shadowstalker, BlackHawke, Morgan of Darkreach, Wee Jas.
Special Lineage or Associations: Master of the Innkeepers Guild of Shadowhaven; [Rumored to have once been involved in the Tilvanot Brotherhood, in Clandestine Ops for Shadowhaven, and in an interdimensional assassin’s guild that does not exist nor can it be named.]

Dark Ones Resume:
First Dark Ones Party was at the Holidome at CopperCon 13 in 1993 on the tennis count.
Started attending some Historian meetings on Nov 2014