Hello all, I am Scrivener.  I have been coming off and on to Dark Ones events since Dark Con 2004.  At that event, I was dragged to Anthem at the Saturday party and immediately knew this was a group I wanted to be a part of. Several of my closest friends have been part of the Dark Ones at different times over the years and I’d like the opportunity to add the rest of you to that list of friends, if you aren’t already. I have attended parties regularly the last year and a half, bringing food, drink, and my time to help make the events run. I love being the person who helps ensure everyone has a good time, and I love the way the DO does it.  Thank you. 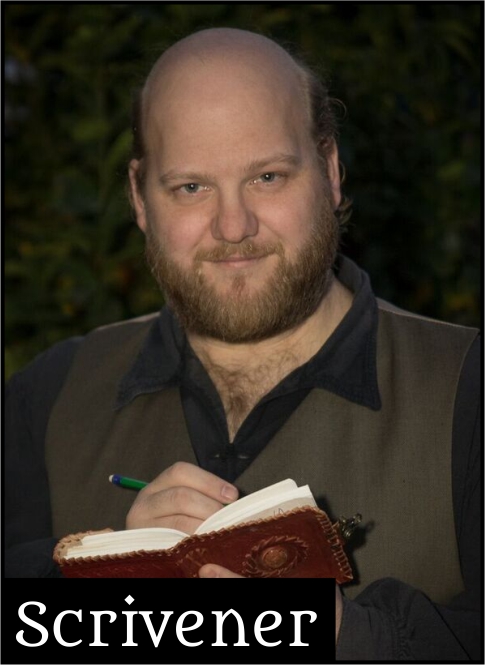 Current residence: I have a lovely little loft above a small bookstore that I own. I wish I was able to actually SLEEP there more often.

Place of Origin: A place you’ve likely never heard of, full of fairy tales where the prince and princess always live happily ever after. It was boring, and I left as soon as I was able.

Chosen profession: My most beloved time is spent writing stories for the entertainment of others. A mix of truth and fantasy, I do spend a lot of time chasing lost knowledge and traveling to other worlds, in search of material, the dross of life which I spin into gold on the page.

Race: As human as most who claim the name.

Hair Color: Hair? I haven’t had an abundance of it since I was 16 summers of age. But what is on my head is a light brown, and my beard has streaks of blond and silver.

Distinguishing Features: I tend to be covered in bits of whatever I was working on, be it ink, barbecue sauce, explosive chemicals, or the innards of the last fool to underestimate me.

Favored Weapons: They say that the pen is mightier than the sword, and while I have performed unwelcome tracheotomies and disembowelments with mine, I do find a sword has more REACH. I carry a rapier named the Daughter of Vivamus, and a bronze Gladius that bears no name. I do also love the fun one can get up to with alchemy. Melt it, burn it, blow it to scrap.

Likes: Meat that still bleeds, companions that will bleed for you and are worth bleeding for, a good spiced rum, and a story that kicks you in the gut and makes you think about it, out of no where, years later.

Dislikes:  Braggarts who can’t back it up, treachery, clumsy prose, and the authors who write it.

Allies: The Society of Stories has often hired me to find a misplaced trinket or treasure. In my travels I have met and befriended Slaymaker, known as Smoke, and attempted to fix his traveling device. (The outcome was NOT my fault, but damn funny. Buy me a drink sometime for that story.) I have run into Mikhail several times, often trading a meal and place at his fire for a few tales spun to his pleasure. I consider many of the Dark Ones my friends, and as Smoke has sponsored my membership, and Mikhail supports me in this goal, I hope to make them my allies as well.

Special Lineage or Associations: Gods I hope not. Nothing says a sloppy story like having to be related to someone to be important.

Membership Status with the Dark Ones: Prospective

I was born to a soldier and secretary, in a land where both were considered useless professions. One taught me to kill without mercy, and one taught me how let let words and records do the killing for me. Happy endings in that place were for those born the right way, and so I left it as soon as I could. I found a talent for twisting tales to the delight of all, and have traveled the worlds, collecting stories, telling stories, and making stories happen. I subscribe to the philosophy of the World As Myth, and follow the tale wherever it may lead me. I am a lover AND a fighter, a poet and a plowman, a craftsman, an artist, and an occasional fine cook.

How about a story?

I quite like this one. I published it as part of a group book on a world that spends too much time talking about sword play and not enough time practicing it.

Dark Ones Resume – Most recent activities performed at Dark Ones’ events.

Stayed after party, broke down tables, stacked chairs, broke down and transported bar stock to vehicles.

Brought pan of roasted beef heart, convinced many attendees to broaden their palate.

Assisted in unloading several gallon jugs of water when a water run was made, filled the various coolers around the party from the jugs