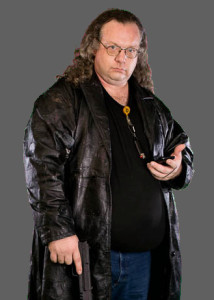 Biographical Information:
He used to live in the 23rd century. He was a spec-ops soldier, in an intelligence division. A pocket sized temporal / quantum displacer came into his possession during this time (Venom has one too), on his last mission. He and his twin, Venom, were sent on a mission, and only Venom knew it was wetwork. Smoke walked on that mission, and Venom was assigned to assassinate HIM. Of course, he used the displacer to escape. To this day, he is trying to get the darn displacer to work the way he wants, but if he tries to displace more than a week or so, or more than about 10 feet, the effects are random. Too bad that the displacer takes a week to recharge…  Before he got the hang of the displacer, he wound up in Medieval Japan, a Warrant Officer on a Dreadnaught Starship, 1987 on earth, and later on, a magical medieval world, where some nice guys in a castle took him in. They still give him funny looks when he pulls out his pocket computer… but he understands.
Venom is still trying to kill Smoke, and it seems that Venom has found some sort of bizarre way to do things with the displacer. Venom has already been killed once, and returned, looking about 10 years older than the other
appearances.