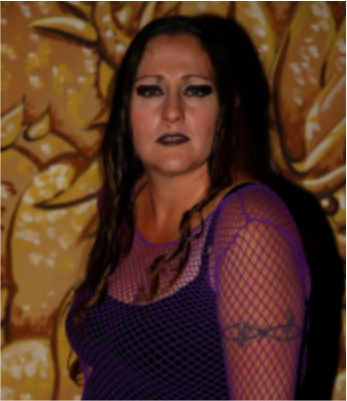 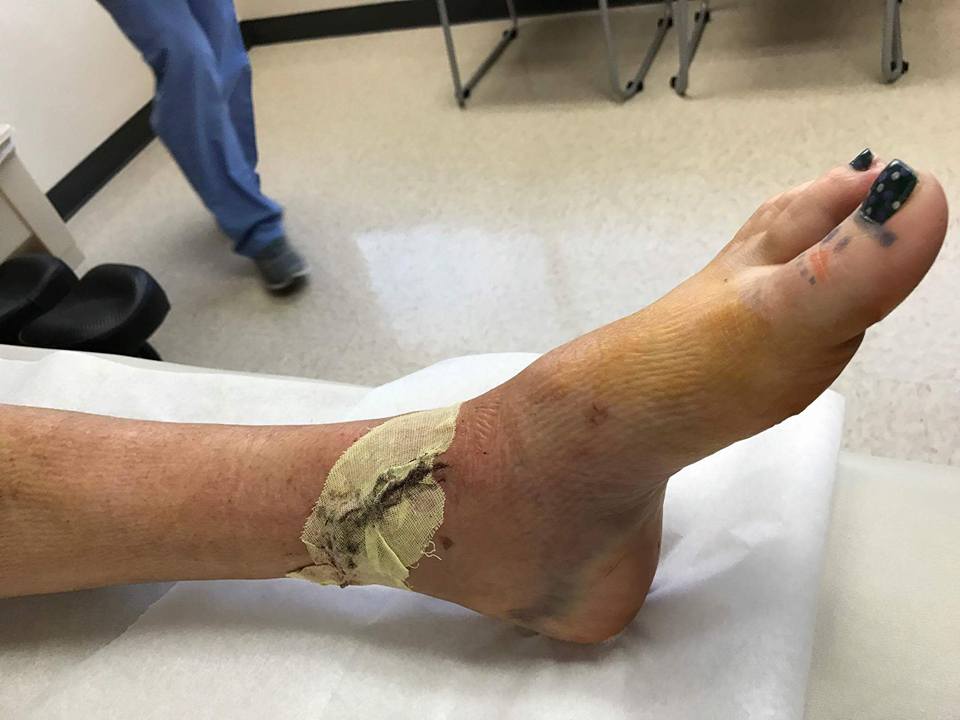 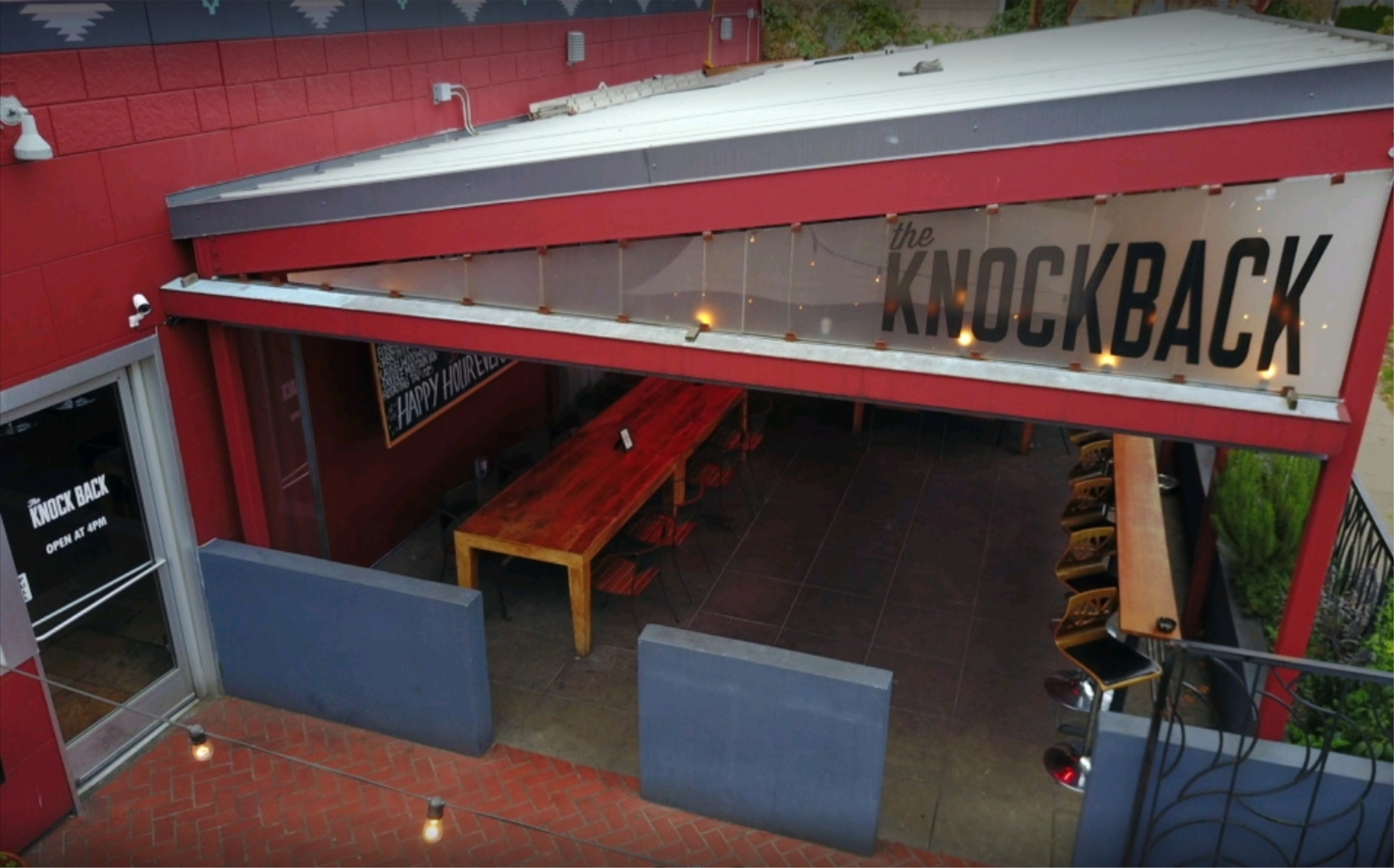 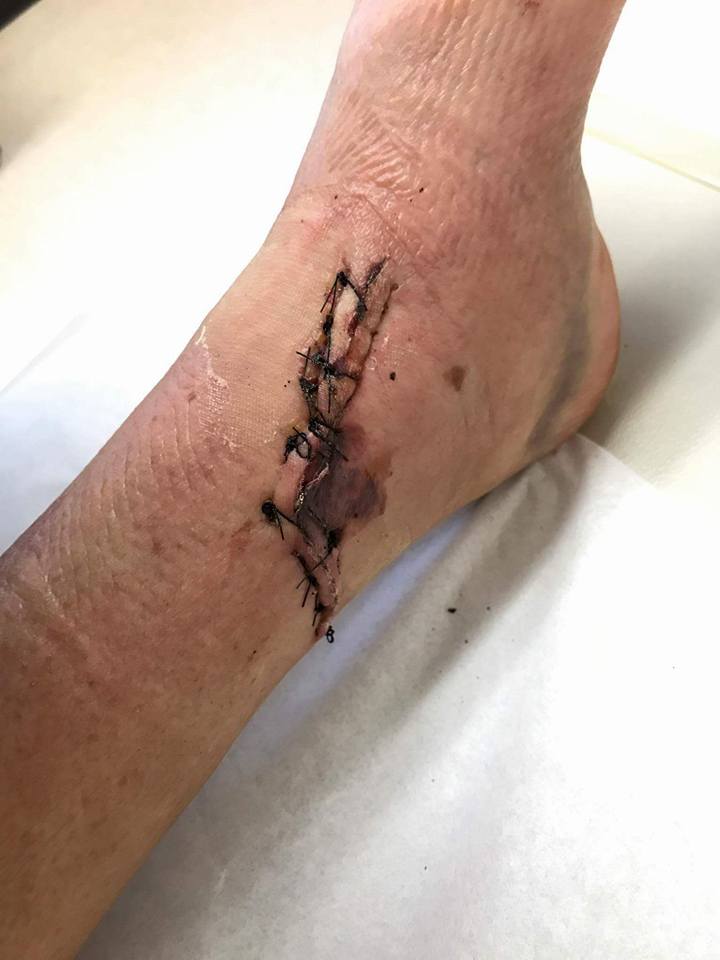 Trillian got in a Bar Fight and Broke her foot!!

This is long, but a tale that needs telling. I know the whole story of how Tina broke her ankle. She humbly says it’s the dog’s fault, but she’s downplaying it. Hardcore.

See, Tina and Lindsay found a bar that was reported to have good music and a lively atmosphere called “The Knockback”.

When they get there, they realize it’s a biker bar. Definitely a lively place, and they find a seat at an unoccupied table. The crowd’s a little rough, but nothing they couldn’t handle. Sure, it was a little weird that they had a karaoke machine on the small stage, but they figured that since karaoke seemed only to be on Tuesday nights, and as long as they didn’t have to watch some guy with a “ZZ Top” beard singing along to Amy Winehouse, they could hang.

Lindsay goes up to the bar to get a couple of drinks and put in an order for some cheese sticks.

She’s right next to some bulky guy in a leather vest with a mohawk, with a tattoo of a pinup girl on the side of his head and a screaming, fiery skull on his neck. Beefy. He looks to the side and sees Lindsay waiting for the bartender, and gives her a leer. “Whatcha drinkin’?” he asks.

She looks at him and says, “I’m here with someone.” Lindsay looks uncomfortable, and glances back to Tina, who’s now watching intently. “Look,” Lindsay tells him, “I’m just grabbing a couple of drinks and a snack. So, no, thank you.”

“Aw, come on, little girl. I bet I could show ya a real good time.”

Tina overhears, despite the din in the bar, as Lindsay takes up a defensive stance. They’re equestrians. They know how to handle an obnoxious beast or two.

Lindsay curls a sneer at him and replies, “I don’t know if YOU heard ME. I SAID, ‘no, thank you’, and that I’m here with someone.”

The bartender is standing back, looking a little wary. “Come on, Sledge. Leave her alone,” she urges. “You just got out a month ago, and your parole officer is supposed to see you tomorrow.”

“Shut your hole, Trish. This is between me an’ the little girl, here.” That was his second mistake.

Tina’s been gripping the side of the table, eye twitching, grinding her teeth, but staying put because she knows Lindsay can handle herself. But hearing Lindsay being called “Little Girl” not once, but twice, is making her fist ball up.

“Sledge” grins lasciviously. “Come on, sweetheart.” Then he makes his third mistake. He grabs Lindsay by the arm.

“HEY!” Lindsay objects, and tries to wrench her arm out of his ham-hock of a grip. “Get the FUCK off me!”

This is the last straw. Tina goes up and stands behind Sledge. “Listen to her, ‘Sledge’,” she tells him in a warning tone. “Do. Not. Touch her. She’s here with ME.”

Sledge sniggers. “YOU? Bitch, I would back off and sit your skinny ass down if I were you. This here’s got nothin’ to do with…”

Sledge doesn’t get to finish his sentence before Tina hauls back to Kansas and jacks him right in the jaw.

All hell breaks loose. The gorilla mutters something disparaging and goes to hit Tina back, but Lindsay grabs a hold of one of his arms and swings her leg around, kicking him in the hamstring. He yelps, growls, and tries to get her off him, but Tina takes the opportunity to reach up and grab hold of his lip, twisting it until you could see the gums. He rears up, Lindsay dangling from his arm while she’s still kicking him and screaming extremely un-politically correct epithets into his face.

The bouncer rushes over to break up the fight, nobody else daring to confront them, and pulls Lindsay off Sledge’s arm and separates him from Tina. “Sledge, get out. Come on, now. You go, and we won’t call the cops…”

As the ass-hat is headed to the door, he says something over his shoulder to Tina and Lindsay that is DEFINITELY not okay, and Tina pulls her leg back and kicks the dude so hard from the back in the cash n’ prizes that her ankle gets caught in his crotch as he howls in pain and crumples to the floor. As he’s whimpering, her foot gets stuck in the crease of his chaps, and *SNAP*.

So she almost literally broke her foot off in some guy’s ass. And the lip-grab is how she got the nickname “Twitch”.